This is an ancient Erubian legend, when humans had great magical powers to transform themselves into spiritual beings or creatures. The Madeur Kub (people of great magical powers on Erub) created Edgor (Nepean Island). The purpose of creating islands, reefs and cays was to make safe habitats for nesting sea birds and other animals nearby. These creatures in turn would become food sources for the Erubam people. And so Erubam le (Darnley Island natives) enjoyed many bountiful years.

Soon after time, neighbouring islands and other raiders came and plundered Edgor of its resources. Reluctantly, the madeur kub with both their leaders Paiwer and Rebes together with their high priest Kobiripatiri and his priestly followers decided to create another sanctuary called Maizab Kaur (Bramle Cay) further away from the Sirwa Garagara Meme Kurup (plunderers). After the completion of Maizab Kaur Paiwer, Rebes and the Madeurs sequentially metamorphosised into stone. Geb (stone fish) a member of this ill-fated party seeing this inevitable doom quickly turned away from the magic and escaped the area fleeing northward. Geb eventually arrived exhausted and hungry on a submerged reef on the mouth of the Dodogab Kusa (Fly River) and lay there bewildered.

Soon after, Geb was met by Omai (dog), who had come from Iama (Yam Island in central Torres Strait) who had swum west to Kosartian Island (Gebar), then to Buru and Saibai across to Daudai (PNG). He then ran eastward along the Tawerr (coastline) until he met Geb after swimming out to fetch a drifting coconut to eat.

Whilst Geb and Omai were getting acquainted, along came Sirr, also known as Karbai (reef heron), who had flown out of Adai (east side of Cape York Peninsula). After the three had become acquainted, Geb asked his two companions to observe his magical powers, (the Erubam word for powerful/ magical word is Aukaka Zogo Mer or Au Kela Kela Zogo Mer). The ocean floor ub, shook and the waves went wild in all directions, gur purorperor aziamdari, soon the island of Parem came up from the depths of the sea and clung to the shallow reef and took form.

Trees and mangroves grew and the reef dried up. In the process of this magical transformation, lug sirrdamili, Sirr stepped back in awe and accidentally put one foot on Geb’s dorsal fin and was stung, enduring unbearable pain. He flew away from Geb and Omai to another area of the island. Today all the clans of Parem are formed out of these three principal totemic figures. Kiwai is the language spoken on Parem Island today. Yodo is stonefish in Kiwai. Geb is stonefish in Erubam. The natives of Parem Island however are called Gebarobi, meaning people of stonefish and not Yodorobi. Geb is an Erubam word and Parem Island was once territory or Erub. The modern borders of today’s nation may exist but legends exist also.

There are no reviews yet. 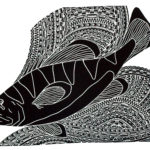