When Amipuru of Wagedagam was fishing with his spear between Paidai and Tipait one day, he saw a pelican swimming in between the two small islands, Widul and Pururai.  He decided to catch it and give it to his children for a pet.  So he broke off some branches of mangrove and, using them for camouflage, waded and swam towards the pelican.

Just as he reached it, however, it took fright and rose up from the water.  Amipuru managed to grab one of its legs with one hand and held on tight.  The pelican flew into the air and circled Wagedagam.  Then it flew across Mabuiag to Kuiam’s Hill and Bau and out over the passage between Mabuiag and Kuiku Pad (Jervis Reef).  Amipuru held on for dear life.  Sometimes he changed hands.  He was waiting for the pelican to fly over soft mud before he let go.

Eventually the pelican returned to Wagedagam and flew out over the mud offshore from that place.  Amipuru loosened his grip and fell like a stone, to sink to his neck in mud.  The people of Wagedagam saw him fall and they tried to dig him out.  It was useless.  Faster than they dug away the mud from around him, the sea rushed in with the rising tide.

Before long the poor man was in imminent danger of drowning, because the water was up to his mouth.  “We can’t do anything for Amipuru” the people said, so Mamoose (Head Man) cut off his head with a bamboo knife.  Amipuru’s wife and children wept. 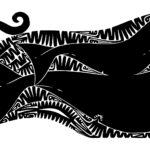